2. Setting in a frame

Although setting-up weapon in a frame has a huge impact on an object it is often treated as one of graphic’s tasks. It is so, because placing an object in character’s hands requires cooperation of a few specialists from different branches. It is often beyond the competency of a modelling person.

Placing weapon correctly in the frame is important, as setting the position early in the work makes it easier to decide which elements are important and which should be abandoned. Setting an object determines the choice of silhouette, proportions and details’ visibility. Therefore, I’ve decided to discuss this chapter as the first one, before starting any kind of modelling.

While working on a FPP model, a graphic must check it in a scene most resembling the one in the game. Thus, one of a graphic task is to prepare the set-up. It is necessary even if tests would require setting camera in a modelling software. It would be perfect to have a preview in the game engine. It isn’t always possible though.

One of the most basic parameters of an object placed at a camera is the object’s scale. Weapon should not be too big, otherwise it would cover the battlefield. Neither should it be too small, not to disturb perception of the scale of the surrounding. The best option is to stick to about one-eighth of the screen surface and not to exceed the fourth quarter.

An interesting approach towards the scale and settings is presented by Ryan Duffin in an article on animating weapon in FPP games. 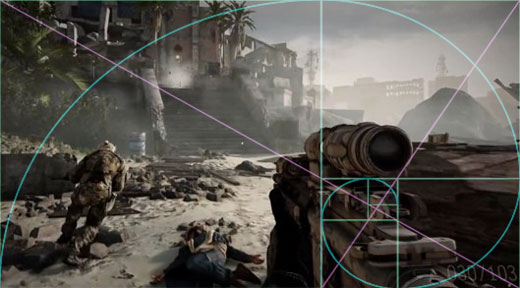 When experimenting with gun placement for Medal of Honor: Warfighter, and surveying gun placement in other games, he found that the most pleasing weapon location corresponded to the spiral formed by the Golden Ratio as applied to the screen. By lining up all the game’s weapons according to this rule, he achieved a consistent and intentional look, instead of just placing them arbitrarily on the screen. source

The size of an object depends not only on the correctly adjusted proportions of space taken by a weapon in comparison with the screen space, but also on the weapon class.

When working on a given set, the correct relation between the scale and models should be preserved. Everybody knows that a pistol is smaller than a heavy machine gun as so on. The scale of weapon should be changed so as to widen the contrast between types of weapons. Players should get a clear message: The bigger the weapon, the more powerful it is.

Rage could be an example of a game where the size of weapon is proportional to its power.

The scale of hands in the FPP view should remain consistent with all the objects owned by a player. If, for some reason, we need to change the scale of hands for a particular weapon, the differences should not exceed about 15%.

Talking about FPP models we need to acquire a just assumption that the object visible on the screen is only a decoration, a prop. It has not much in common with the game mechanics. In reality, in video games we do not shoot with a weapon but with a crosshair.

It can, therefore, be concluded that weapon in a video game is more an element of user interface than the game environment. Even though it is visually coherent with the presented world and influenced by light, in reality it serves mainly an informative purpose. It informs a player what he has at his disposal at the moment and how powerful it is.

Modelling for the FPP view is, therefore, matching perfect, artistically interesting forms and creating a message.

If a crosshair is the place we are aiming at, it seems logical that a weapon should also determine where this point is. Weapon should aim at the middle of the screen.

The easiest methods to show the direction could be:

Not so vital, but still worth mentioning, is placing weapon on a screen. Ways of doing it depend on the kind of weapon. For example:

all pistols in the same place, on the right and lower,

all shotguns more on the right and higher, and so on…

It is worth thinking over especially while planning the whole set. Unfortunately, restricted scope of possibilities to choose the angle and the height results in not many creators taking this opportunity.

Call of Duty World at War could be a good example. Weapons of the same kind have the same angle and place of embedding.

Each weapon has its unique character and features that need to be highlighted, also in the frame. Sometimes the weapon itself determines the set-up which is most favorable for a particular model.

This rifle has a great detail at the magazine. It would be worth capturing it in the camera view.

While planning the whole set of weapons, features of one object are of secondary importance. It is still worth making an effort and showing what is unique.